Dimbayaa’s priority is the development of women’s health care in Africa to include sexual and reproductive health issues such as female genital mutilation, sexually transmitted diseases, child mortality and infertility.

The Gambia is the smallest yet most densely populated country on the African continent.  The UNDP’s Human Development Report for 2010 ranks the Gambia 151st out of 169 countries on the Human Development Index. An estimated 62% of the people live under the poverty line.

Female genital mutilation (FGM)  is the ritual removal of some or all of the external female genitalia. It is estimated worldwide 200 million women have undergone FMG, mostly in Africa. 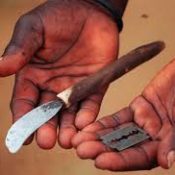 Though most girls are cut before the age of five, it may be done anytime from a few days after birth, up to puberty and beyond.  FMG is typically performed by a traditional circumcisers using blades.

The extend of the mutilation differs  from partial or total removal of the clitoris (Type I), to removal of the inner labia (Type II or excision) to removal of both inner and outer labia and closure of the vulva, known as infubulation or pharaonic type FMG (Type III).  In this last case only a small opening is left to pass urine and menstrual fluid; the vagina is later opened for intercourse and opened further for childbirth.

Risk and complications increase with the type of FMG. Physical consequences are numerous; fatal bleeding, recurrent infections, difficulty urinating and passing menstrual flow, chronic pain, the development of cysts of fistulae, infertility and complications during childbirth.

In 2015 the then president of the Gambia Yaya Jammeh banned FMG.

Bacterial infections include bacterial vaginosis, chlamydia, gonorrhea, lyphogranuloma venerum (LGV) and syphilis. The most common STD is Chlamydia, which is notorious for its effect on fertility. In women chlamydia usually does not give any symptoms. If left untreated it very often causes bilateral tubal occlusion.

Viruses cause genital herpes, Hepatitis B, Human Papillomavirus (HPV) and Human Immunodeficiency Virus (HIV). The prevalence of HIV in the Gambia is estimated at 1.7% (UNFPA 2005). Parasites are responsible for trichomoniasis and pubic lice. STIs occur worldwide, but some infections like chancroid, lophogranuloma venerum and granuloma inguinale are more common in less industrialized countries.

Though there are hardly any statistics on this in the Gambia, STD’s are certainly endemic. Sex tourism, and in lesser extent also polygamy being contributing factors in the spreading of them.

Polygamy In The Gambia

Polygamy is widely accepted (if not a widely debated) in the Gambia. Islamic tradition allows a man to marry up to four wives. 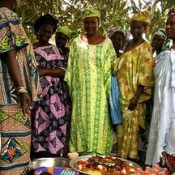 The highest status wife is the first wife. Usually a man’s first wife will be a woman about his same age, but other wives who are married over the years tend to be much younger and in some cases wives can be over half their age.

Polygamy is losing popularity among the younger men who see first-hand the economic ramifications of supporting a large family on a limited income.

If a marriage remains without children this may be reason for the man to reconsider and ‘take’ another wife.

Child Mortality In The Gambia

Despite improvements in health services, including the Extended Program for Immunization (EPI), and public awareness of health programs since the inception of primary health care (PHC) in the late 1970’s, child mortality remains a major concern in Gambia. 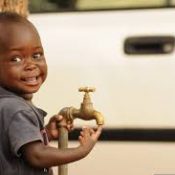 In 2010 child mortality rates in rural areas were 36% higher then those in urban area’s.

Main causes of child morbidity and mortality are malaria, pneumonia and diarrheal diseases.

Family Planning in the Gambia

Since the 1980-ies several international programs have been supporting initiatives on promoting birth control in the Gambia as well as prevention of STD’s. Especially the UNFPA, the United Nations Population Fund has done a lot to help make several forms of contraceptives available in the Gambia. 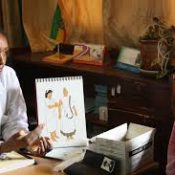 Most clinics both in suburban and rural areas offer a variety of subsidized contraceptives. Condoms, the pil, IUD and also the implanon are usually widely available in the Gambia.

Despite these efforts, family planning continues to meet with resistance for a number of reasons. One major factor is the husband’s role in determining the family size. Also, many feel that family planning goes against the teaching of Islam and the Koran.

By far the most popular form of birth control is breast feeding, which can effective but is reliable only for the first six months after giving birth and only if a woman has not had a period since delivering her baby, breastfeeds her baby at least every 4 hours during the day and every 6 hours at night and does not substitute the babies breastfeeding milk for any other food.

The contraceptive prevalence rate for modern methods is about 17 % in the Gambia, while the need for them is estimated at about 30 %. Many women in  West Africa desire to have reproductive freedom. Educational programs are ongoing.

Infertility in the Gambia

Infertility prevention and care often remain neglected public health issues, or at least they rank low on the priority list, especially for low-income countries that are already under population pressure. 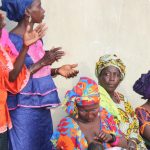 Gambia is one of the countries in the “African infertility belt” that stretches across central Africa from the United Republic of Tanzania in the east to Gabon in the west. In this region a phenomenon described as “barrenness amid plenty” refers to the fact that infertility is often most prevalent where fertility rates are also high

WHO demographic studies from 2004 have shown that in sub-Sharan Africa, more than 30% of women aged 25-49 suffer from secondary infertility, the failure to conceive after an initial pregnancy.

Main cause of infertility in Africa is the result of genital infection, which may have been sexually transmitted, or caused by traditional practices such as female genital mutilation or unsafe abortions and home deliveries in unhygienic circumstances. These infections, if left untreated often result in bilateral tubal blockage.

In African cultures, womanhood is defined through motherhood and usually it is the woman who carries the blame for the couple’s inability to conceive. Women who remain childless may be seen as a burden on the socioeconomic well-being of a community.

Childless women are often stigmatized and ostracized. Facing social isolation and ostracism, childless women often consider that, without children, their lives are without purpose and without hope.

The situation is further saddened by the lack of support women face, both emotional and financial. In Africa infertility is not considered to be a medical problem but causes, and therefore also remedies, are  sought in the spiritual world.

Women are not encouraged to seek  modern technical treatments. Unlike the Western world, where infertility is openly discussed and help and information is widely available, in most African societies the topic often is taboo.

Modern fertility care, if available is very basic. Assisted reproductive techniques such as IUI and IVF are either very costly or unavailable.