In many African countries, having children is of out most importance. Women who can’t get pregnant, miscarry of whose babies die carry a great burden. They face ridicule, humiliation and rejection from family members and villagers. Their husbands may divorce them, or ‘take’ a second wife. Barren women often suffer from stigma, social isolation, ostracism and even violence.

In the Gambia and Senegal these women unite in groups called the Kanyaleng. They are the village entertainers and perform at festive events as weddings and naming ceremonies. Kanyaleng are often excellent dancers and drummers and they have a talent to expose sensitive topics in a humorous way, including taboos.

Kanyaleng may poke fun at the expectations of women, the inability to meet standards of a large family, and the negative consequences this entails. In their bold song and dance performances which are full of laughter they tease and ridicule on men and play with conventional traditional gender roles. Kanyaleng membership is a useful coping strategy. The solidarity of women of the same village or community, united by their struggles to meet standard of womanhood as mothers, and the pressure society puts on them, create strong support networks. Furthermore membership helps them improve their long term status, both social and economic. 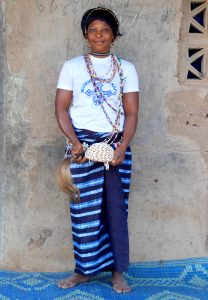 Bateh, a woman in her early forties and a member of the Diola Karoninka tribe, has been a Kanyaleng for many years. Bateh was called Hawa Demba before she joined the Kanyaleng. Women are often been given a new name when they become Kanyaleng. The new name is should distract evil spirits and stop them from following the women and thus break their negative influence on the women’s fertility. A Kanyaleng name may reffer to a company or organisation or a country. Examples are Africell (a local telecom company) and Taiwan.

Every Kanyaleng women has her own specific costume, jewelery and attributes she uses in the performance. They may carry dolls or decorated calabashes. They may be seen with a toy photo camera, or carrying a teddy bear or plastic doll on their backs. Some Kanyaleng wear man’s cloths.

When Hawa got married she gave birth to one child. After this she suffered from several miscarriages. She sought help from a Marabout, a spiritual healer. The Marabout gave her a juju and prayed for her, but he also advised her to find a group of women who could pray with her so she would conceive again.

Meanwhile, the local Kanyaleng group had already decided they would approach Hawa at an unexpected moment and perform a ritual for her. They surprised her one day at a wedding that she happened to attend. They teased her, she felt quite embarrassed by their bizarre remarks and touching, even hitting her on different part of her body. Then finally they took her into a house and made her sit down on the floor in the middle of the room. All eight Kayaleng women sat around her and sung and prayed for her, begging God to give her another baby. This is when she received the name Bateh, which means ‘to go cross’.

Kanyaleng initiation often involves throwing water and porridge on the new member. The 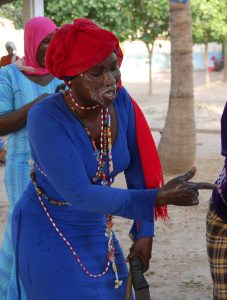 underlying thought of this is that the porridge creates a barrier between them and any evil spirits that may interfere with her fertility.

Hawa’s mother in law Binta then took her on a journey. They traveled to Binta’s village Boune in Senegal. Here, far from her home village in the Gambia, Bateh would be safe from the evil spirits that had troubled her beore. Binta stayed with her in Boune, and Bateh’s husband visited on a regular basis. Binta crafted Bateh her Kanyaleng attributes; a calabash decorated with shells and a stick with cows hair. The Kanyaleng of Boune danced and prayed with Bateh. After some time Bateh got pregnant. She stayed in Boune throughout her pregnancy and also the first weeks after she had given birth.

Two years after she had left her home village in the Gambia, Bateh returned with in her arms her daughter Sainabou. Bateh is a member of the Kanyaleng group there. Kanyaleng membership is for life and also women who later become mothers will usually keep on performing with them. Children born within the group will have the groups special protection. Bateh later gave birth to five more children.

Several Kanyaleng groups have been asked how they feel about Western medicine. Their answer was unanimously positive. Traditional ways, though often helpful, may not always be able to solve the problem. Physical problems should be attended to by a doctor. In Taiwan’s words: ‘Kanyaleng is something like a belief and a luck, sometimes it will happen when you pray and if God wish there will be a child, but sometimes it will not happen’.

In the past, NGO and government led programs involved Kanyaleng in outreach projects, educating the people on subjects such as HIV prevention, maternal nutrition, family planning and water recourse management that ran nation-wide. The Kanyaleng, outspoken, articulate and experienced performers, proved very successful in delivering the message that was otherwise sometimes difficult to understand for people in the rural area’s of the Gambia. In the future we hope to involve Kanyaleng kafoo in our educational outreach programs on the subject