Katchikaly is a small sanctuary, lokated in the middle of the somewhat shabby little town of Bakau. It is a lush little ancient tropical forest with centuries old trees and beautiful flowers. Through a narrow winding path you reach the pool, that is inhabited by some 100 Nile crocodiles.

The crocodiles are laying in and around the pool it is said they eat on fish only. Tourists make photos while they crouch next to a crocodile, walk through the museum and then quickly buy a bottle of Fanta before they move on. Gambian women come here to wash themselves with the holy waters of the pool, helped by women of the Bojang clann who have been specialy trained in the rituals 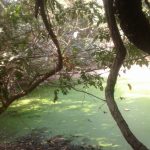 The history of the pool dates back to the 16th century when the Bojang family, as of to date still the owners of the land, managed the only fresh water source of the town of Bakau.

As the story goes, one day two Bojang brothers were tapping palm wine when a female Jinn, a spirit, arrived at the pool. As she leaned forward to fetch water the child she was carrying on her back fell into the pool.

She screamed with fright. The brothers came running and found the woman in tears and shouting ‘Kachikaly!’ In the local language Mandinka ‘Pick it up and put it down’. 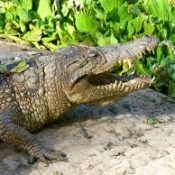 The brothers dove into the water and found the child sitting on a large stone. Quickly they took it up and handed it back to the mother. The Djin thanked them and said a prayer.

From that day on, she declared, the lake would be a sacred place where the water has healing powers and where “every woman who comes here for ritual bathing – provided she will not sleep with any man other than her husband – will within a year bear a child.”

The Bojang family would forever manage the pool and its healing powers. In turn, the brothers that day sacrificed the first thing they caught in their nets; two crocodiles, which were released alive in the pool. These crocodiles have produced many generations of crocodiles and live on in the current crocodile family of Katchikaly. 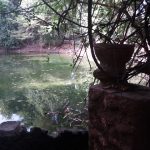 Women often come in groups and bathe one by one in a separate little shelter with the holy, surprisingly clear water taken from the pool.

After the bathing, they are once again urged not cheat on their spouses and they will be given a bottle of the holy water to take home and use early in the morning, and before going to bed.

In return, the women throw some cola nuts in the pool and leave some money for the Bojang elders. ‘And it works,’ says Musa, one of the managers of the pool ‘because its mental’. The power of faith… These women, who often suffer from tremendous pressure from their husbands, in-laws and local communities, find compassion, consolation and new hope at the pool.