The Kanyaleng are women are women who all have in the past, or still are struggling with infertility or child mortality. Kanyaleng are excellent  singers, dancers and drummers. They often perform at public gatherings and celebrations such as weddings and naming ceremonies and are known for their bold acting and ridicule.

Kanyaleng membership is a useful coping strategy. The solidarity of women of the same village or community, united by their struggles to meet standard of womanhood as mothers, and the pressure society puts on them, create strong support networks. Furthermore membership helps them improve their long term status, both social and economic. 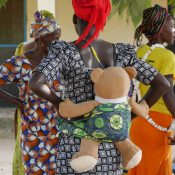 Kanyaleng often perform at festive ceremonies such as weddings and naming ceremonies. In their bold song and dance performances which are full of laughter and teasing they ridicule on men and play with conventional traditional gender roles.

This, so is explained, enable the Kanyaleng to shame themselves before Allah, in the hope that this outrageous behavior will convince divine will to take pity on them and bless them with children that will survive beyond their childhood years. This is referred to as ‘God begging’.

Guests attending these performances bring small bills that are distributed during their songs and dances, then pooled and shared within the group.

Needless to say, that due to their public pursuit of motherhood, most Kanyaleng women have a somewhat ambiguous relationship to these celebrations. 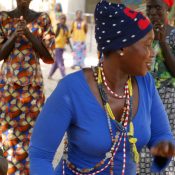 When a woman joins the Kanyaleng, this is a public admittance that she has problems with infertility or that she bore children that have died.

Even though most members of the community will already be aware of her situation, becomming a Kanyaleng, dressing like one and performing with the kafoo draws extra attention to this.

Besides that, the rituals involved in the Kanyaleng initiation are often embarrassing. But becoming a Kanyaleng also allows women to temporary flout the conventions and roles that give their lives structure and meaning, yet confine and limit them.Though by becoming Kanyaleng women really appeal to the divine to heal and make miracles happen, membership of the Kanyaleng Kafoo has other benefits.

Kanyaleng operates both as an individual identity and as an expression of group solidarity, with members working together and strengthening each other in their attempts to attain their personal goals, reproductive and otherwise, through work and ritual. Furthermore membership helps them improve their long term status, both social and economic. 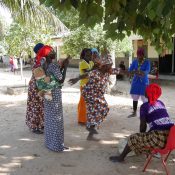 In the 1990s Kanyaleng gained an additional role initiated by the the ‘World Banks Women in Development (WID) Program, when NGO and government led programs involved them in educational projects, educating the people on subjects such as HIV prevention, maternal nutrition, family planning and water recourse management that ran nation-wide.

The Kanyaleng, outspoken, articulate and experienced performers, proved very successful in delivering the message that was otherwise sometimes difficult to understand for people in the rural area’s of the Gambia.

This role as ‘Traditional Communicators provided the Kanyaleng not only with some extra income, but it also helped their status as productive members of society.

To our knowledge nowadays Kanyaleng kafoo no longer participate in projects like this on a National level. Yet, all over the Gambia, they are still well known and appreciated in local communities.

In the future we hope to involve Kanyaleng kafoo in our educational outreach programs on the subject of infertility awareness.